Building a Publishing Empire Through Speaking and Events Monetization: Multipurpose Your Audio Files

This month, October 2016, Amazon Kindle Direct Publishing is highlighting great writing by indies with its #PoweredbyIndie Celebration. From what we can tell, the inclusion of titles is based on direct author upload to KDP, Createspace, or ACX, paid sales, number of reviews, and average reviews. There may be other criterion, of course. They’re promoting a landing page that links to genres, authors, and profile on authors’s indie experiences.

The question is why? What do they get out of this? We know that indie books comprise a hefty share of Amazon’s ebook sales dollars, at least 25 (dark blue line) and maybe over 30% (adding in the light blue line), according to our favorite data source, the Author Earnings website. 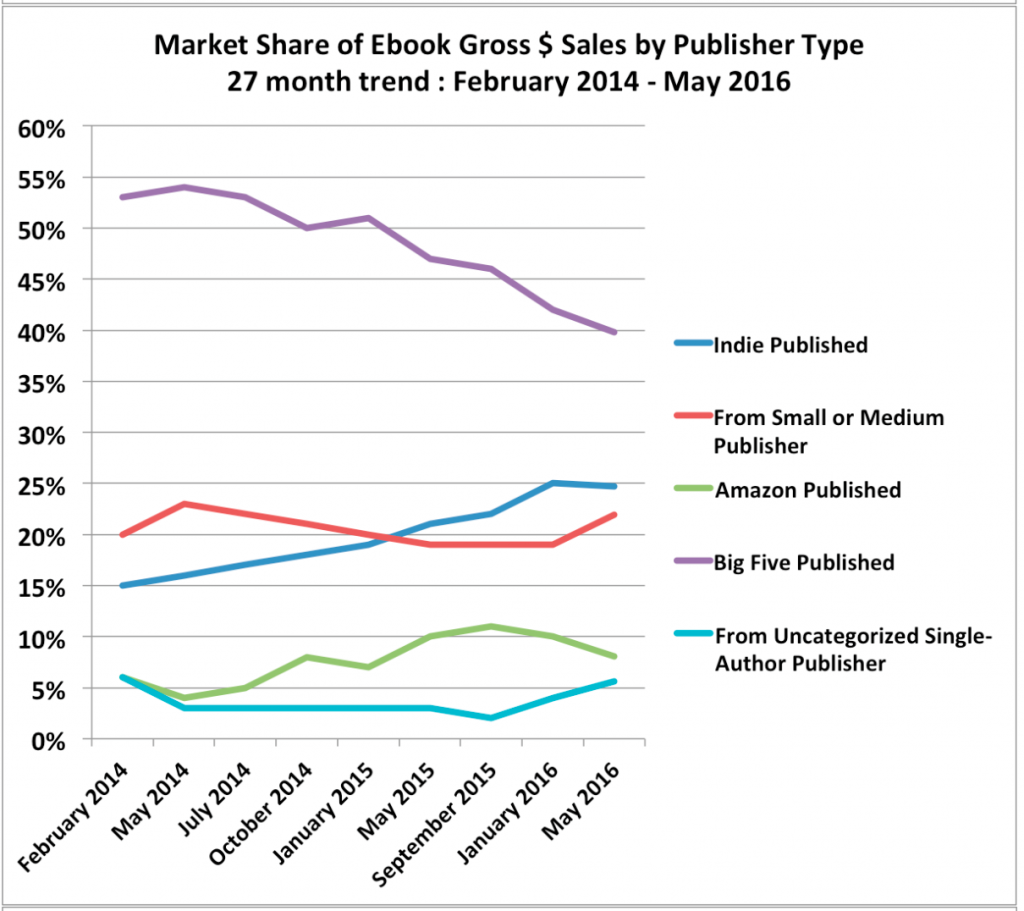 It isn’t like this “celebration” is on their home page, so it’s hard to see how the impact will be HUGE on increased sales for the included books, although indie books are an easier sale to make to customers, since they are priced into the market. It will steer customers to the best in indie books, so Amazon KDP will create a positive impression for those that haven’t read indie before and possibly create a stronger long term market for indies overall. (This can’t make traditional publishing happy.) Is it for Kindle Unlimited discovery? Many of the included books are KU, and this could create a positive impression for KU books. But many/most aren’t in KU. Does Amazon hope to lead the best in indie authors over to KU by making them feel warmly to Papa Jeff and the gang?

It’s just impossible to know for sure.

Another thing that is interesting is the inclusion of literary fiction and nonfiction, not categories previously believed to be dominated by indies in terms of unit sales (while indies only bring in 25-30% on Amazon’s gross sales dollars for ebooks overall, they account for nearly 50% of unit sales). 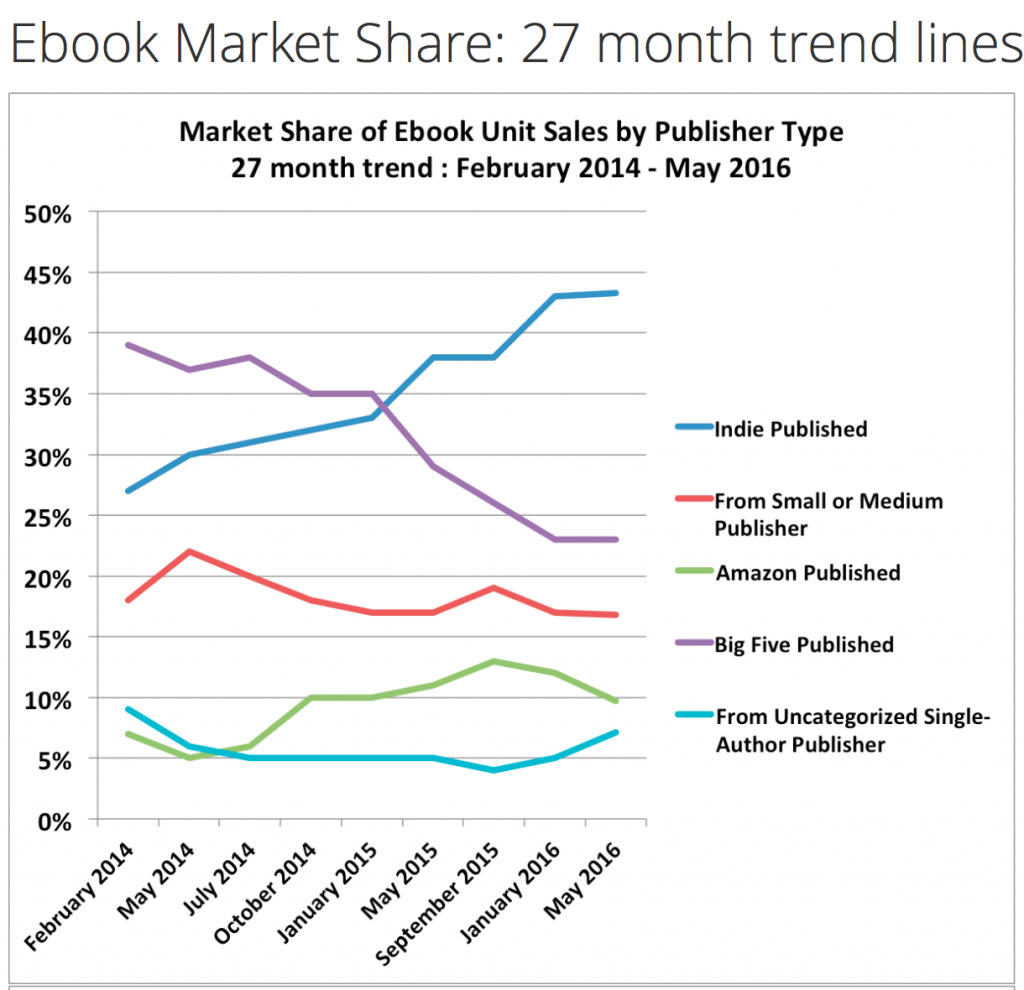 Here’s how that looks by genre (but nonfiction is not included): 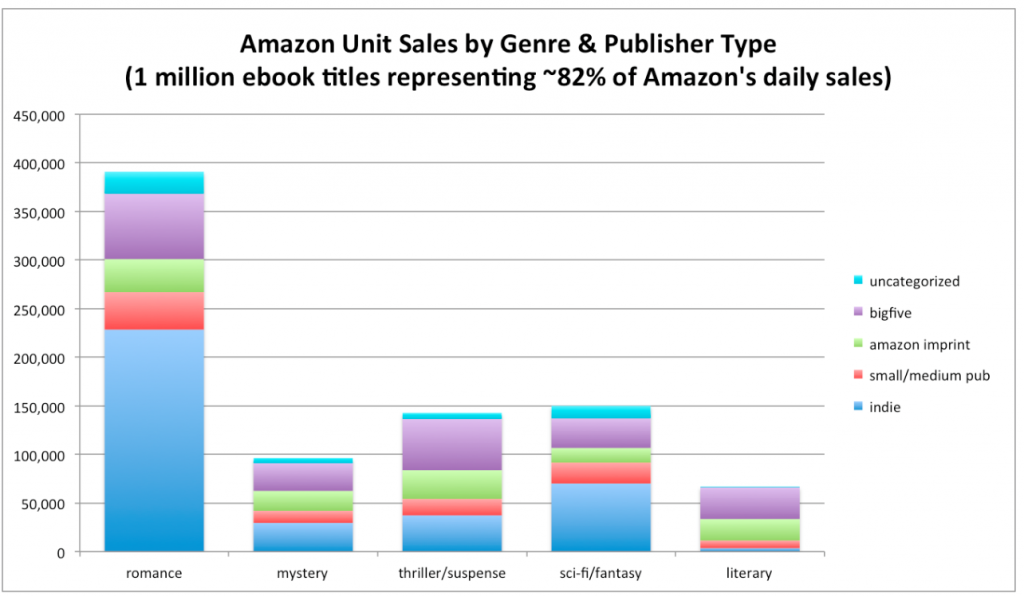 The most recent (May 2016) Author Earnings data dive and analysis discovered an awarding-winning literary fiction indie “hiding in plain sight,” making six figures. Maybe there are more indies making inroads out there in these non-genre categories than we ever dreamed.

Whatever the reasons for this, there’s no downside to the authors included, even if the upside in the short run is probably not much more than giving them something to promote. Which in the end may be exactly what Amazon KDP wants: the power of the indie promotion machine, by authors that have mastered the art of promotion in creating lifestyles funded by their books. For example, SkipJack author Pamela Fagan Hutchins (whose novels are not on Kindle Unlimited) learned on October 1st that her novels were included and started Facebook posts and tweets with links to Amazon, immediately. This blog is a direct result, and she’ll also be blogging this month on why she loves being an indie author.

Because Amazon isn’t leaving this to chance, sending emails to all the included authors making the promotion easy and subtly directed: 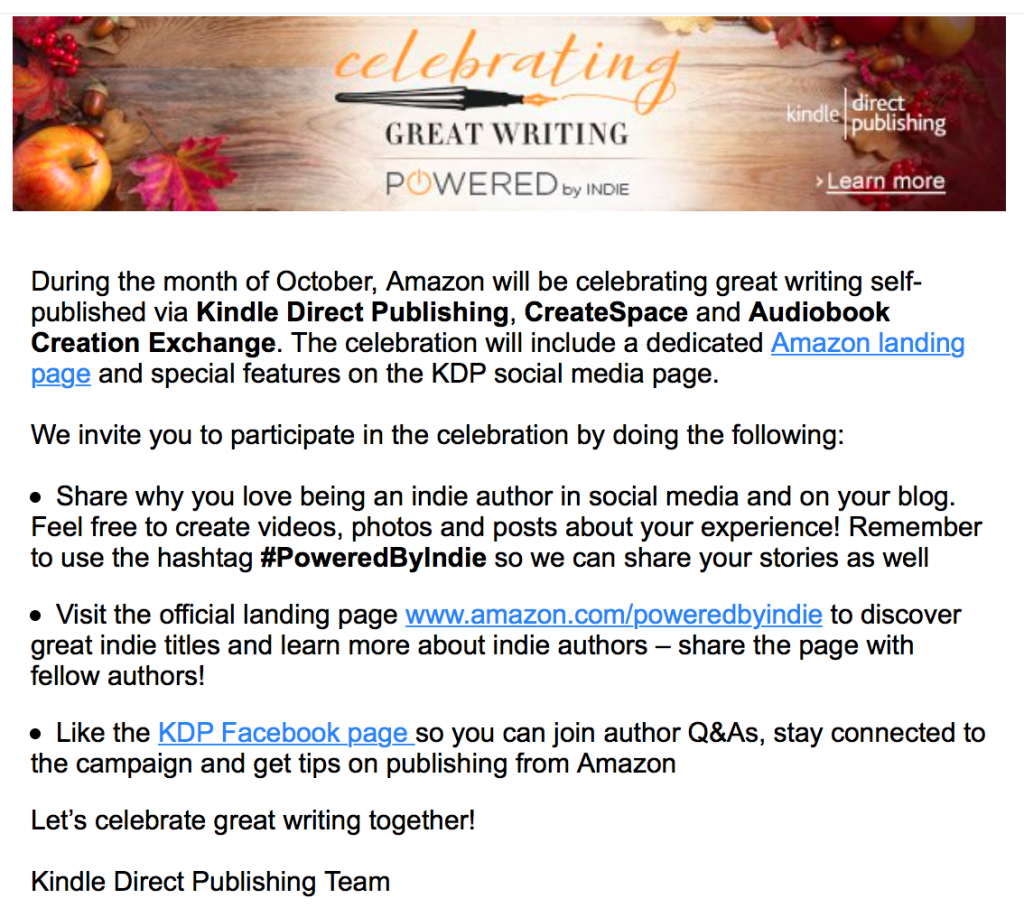 Amazon KDP is a business, not a charity, not a public service organization. In the end, they’re doing this because they believe it will drive more dollars their way.

We don’t mind. Anything that helps indies is a good thing, and Amazon is ever-more #PoweredbyIndies. We know it, and so do they.