Conversion Catastrophe: When ads don’t result in buys from clicks, what do you do?

When you run ads on BookBub, Amazon, and Facebook, you aren’t paying for people to buy your book. You’re paying for them to click an ad link (CPC) or to be served an impression (CPM). As the old saying goes, you can lead a horse to water, but you can’t make him drink.”

Only you really, really need him to drink, or YOU are going to starve to death. You need to sell some books!

So here’s something distressingly hard for most authors to wrap their heads around: if people make it to your book page or view your ad image, then the advertiser has done their part of the job. If no sale occurs, then the one who has failed to convert people to buyers is you.

Sure, we can make excuses. Cluttered Amazon sales pages, with ads to every book in the world but yours on your own damn book page. Trolls who leave reviews that Amazon won’t remove, while they seem to rip legitimate readers down willy nilly (and with no recourse). But the truth is that if you served up your enticing ad to the right reader, that was your golden opportunity to close the deal. You may never get another.

Why do potential readers view ads and book pages and not convert to buyers? (This assumes the ad gets to them and they click it–in other words, that your ad was good enough)

You can maybe think of others. Cool. These are just the three biggest ones I see over and over.

I have made two of three of these mistakes. Let’s take things in reverse first and examine how I screwed up.

Descriptions are dang hard to write. And potential readers have expectations that must be met about characters, plot, setting, and genre, conveyed in a format that allows them to decide quickly whether to spend more time on the book. Not only that, but descriptions must be congruent with the voice of the book, error-free (preferably edited by the same person who edited the book), and appeal to the needs/emotions of the readers, even if the reader can’t articulate them clearly to herself.

And, bonus, they should contain the social proof—best served in the form of blurbs from major authors and bestseller designations—needed to validate the book. All of this with cleverly embedded SEO terms and formatted to compete for attention with all the ads on the page planted by the retailer. Yes, this means use HTML (I know, terrifying, right?).

My books were losing ground against the competition in 2017-2018. As the numbers of Kindle books racked up by the millions on Amazon, my books were getting buried. Once upon a time, I made over $150,000 a year on my writing. Then, I didn’t make enough to run a tab in Starbuck’s (I will say I got very ill for several years and took my eyes off the road and hands off the wheel for a very long time, so I understand why I was losing visibility, but that didn’t fix the problem).

So I was looking for ads and promos, and ways to make sure that when I paid my money for impressions and clicks that I closed the deal.

I looked at my sales pages and other bestsellers in my genre, similarly situated to me. My descriptions had fallen behind the times. Everyone was upping their game, and I was standing still. But standing still while others improve is falling behind.

I updated my descriptions.

A pulse-pounding mystery—the second in the Emily series—from the best-selling and award-winning author of the Katie & Annalise novels.

Paralegal and former rodeo queen Emily only wants two little things. The first is to adopt Betsy—the girl who has stolen her heart but could be deported to Mexico at any time. The other is a second chance with her boss Jack, a smolderingly hot and mysterious criminal defense attorney in Amarillo who runs his family’s horse ranch in New Mexico on the side.

But before Emily can dare to hope for either (or both), the obstacles between them and her mount: two runaway teenagers, an aging exotic dancer, and a dead trucker torpedo a dinner with Jack. She and Jack catch their client—who’s charged with assaulting an officer—selling stolen goods. And to top it all off, Betsy’s zealously religious and overly protective foster parents sic some questionable cops on Emily to destroy her reputation.

Emily just wants to silence all the noise and focus on her priorities: Betsy and Jack. But then the phone rings. It’s the two runaways, with an enormous secret and a desperate plea for help. They convince Emily that she’s the only one they can trust, forcing her into a horrible choice: risking the lives of these two teens, or jeopardizing her own chance at a life with the two people she cares about most.

A shocking murder. A high-speed robbery. Can one ex-cowgirl stand up to a criminal convoy?

Emily Bernal may have traded the fast-paced rodeo world for paralegal work but the change hasn’t made her life any simpler. Between romancing her sexy attorney boss Jack and fighting for custody of her foster child, she wonders if riding a bucking bronco would be easier. But when two runaway teens beg for her help after witnessing a truck-stop murder, the former rodeo queen springs into action.

As she follows the clues along the Texas interstate, she can’t help but notice her boyfriend is hiding something from her. When the investigation turns deadly, Emily’s only chance to keep the runaways alive is to stand toe-to-toe with a criminal conspiracy that could make her the next victim.

Earth to Emily is the second standalone novel in an adrenaline-pumping romantic mystery trilogy. If you like gutsy Texans, rollicking twists and turns, and a dash of humor, then you’ll love Pamela Fagan Hutchins’ wild thrill ride.

Thank you, Bryan Cohen. I now use his three-act, cliffhanger structure (and clever word play) in writing my own descriptions, but his rewrites for me in mid-2018 set the stage for what was promising to be the resurgence of my novels. I had a spectacular BookBub Featured Deal in October, and, armed with his new descriptions, my sales doubled and hung in there.

But we had many miles of catching up left to go, over roads where I encountered more barriers to sales.

In 2019, I was looking for a way to sustain my increased sales volume between BookBub Featured Deals. I’d never mastered the “big three” ad platforms: Amazon, Facebook, and BookBub. As a wide distribution author, I knew I needed a steady, daily, drip, drip, drip of sales, too, not just the explosive, one-day bursts from huge promos, if I wanted to stay visible, especially on Amazon. So I hired an ad consultant to work with me for a few months, and hopefully leave me with a shelf of ads I could easily recycle whenever I needed them. (This is not a post on ads; I’ll write about how that went, at a later time)

But what we quickly discovered is that he had no idea what I wrote from looking at most of my covers. And if he had no idea, how would a reader in a split second figure it out and decide the book was right for him? If the alternative for that reader was to take advantage of a straightforward yes decision on a great deal by another author, the reader was going to do that. To prove his point, he tried to advertise my BOMBSHELL (Ava 1) and my GOING FOR KONA (Michele 1), both of them trilogy leads within my super series, and priced at $2.99. And they had really great read through from book 1 to 3 in each trilogy: 73% for Ava, 82% for Michele.

Ricardo explained I was just not closing the deal on the impression; I wasn’t even getting the clicks I should have, and certainly not the buys from the clicks. And he reiterated that as a writer of mysteries with female protagonists, I was hiding that pretty well with my covers, even if they were attractive. (Meanwhile, he took my Saving Grace and rocked ads on it; that cover is fantastic)

I went back to the drawing board with a new cover artist, Alayah Frazier, and my virtual assistant, Bobbye Marrs.

For my Michele trilogy, we were aiming for suspense/mystery, female protagonist, and a gritty, literal world seen through a haze of pain and grief, without being maudlin.

Before was heavily on symbolism and stark color: 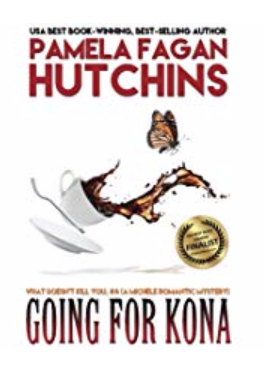 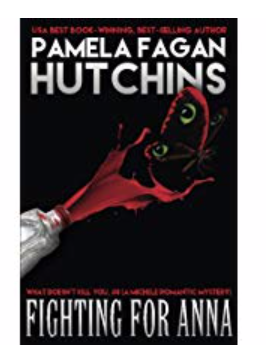 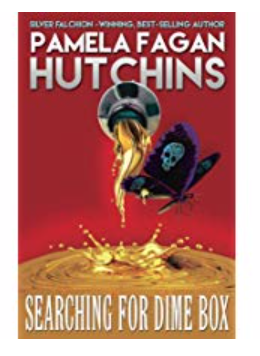 I am really happy with the new covers, even if I do miss the butterfly (it may be added back in some day–we were working against a major deadline). Below I’ll show you how they work with the other trilogy covers within the super series.

For my Ava trilogy, we were aiming for sexy, quirky, exotic, suspense/mystery, and female protagonist.

Before had a kind of Carl Hiassen thing going on:

These covers scream Ava. I am totally in love with them.

And what they all look like when you put them up against my bestselling Katie books and my brash, bold new Maggie books is continuity. You know what you get when you are buying a novel by Pamela Fagan Hutchins. At least I think so/hope so. That’s very important.

And what do you know. The right readers and only the right readers clicked my ads (because I don’t want to pay for the wrong ones–quality clicks, higher conversions, that’s a better result), and they resulted in sales at positive ROI. When I run my ad series, I’ll report out on how that all went down.

For now, ask yourself: do your covers and descriptions convert readers to buyers?

p.s. Here are my new Emily, covers, too. Compare to above. Initial Heaven to Betsy Amazon ads for the full price ebook are ROCKIN’! 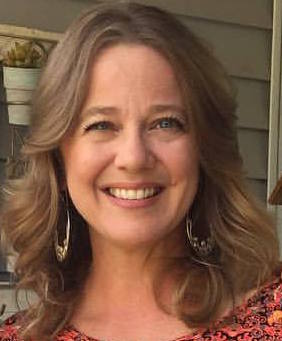 Mystery winner for her What Doesn’t Kill You series, writes hilarious nonfiction (What Kind of Loser Indie Publishes, and How Can I Be One, Too?), too. She teaches writing, publishing, and promotion at the SkipJack Publishing Online School (where you can take How to Sell a Ton of Books, FREE) and writes about it on the SkipJack Publishing blog.

4 Responses to Conversion Catastrophe: When ads don’t result in buys from clicks, what do you do?