And the community cause we support is…

Attentive Driving: I won’t be THAT Sunday driver.

To read more from the media about the “I won’t be that Sunday driver” attentive driving initiative, visit Amarillo Globe News at http://amarillo.com/news/local-news/2012-06-19/beilue-woman-makes-road-awareness-vow.

We believe in giving back. You can probably tell from our indie publishing blog that we believe in giving back to the writing community, for instance. But we think bigger than that. That’s why SkipJack Publishing is putting its efforts behind Attentive Driving as our cause celebre. It all started with a post that one of our authors wrote from her heart after the death of a friend. You can read it below.

To join us in our fight to drive attentively, to get away from lacksadisacal Sunday driver mentality, to eliminate distractions, to never forget the responsibility we have when we operate a machine that can so easily cause the death of others, Click Here to go to our Products page to get your own “I won’t be THAT Sunday driver” sticker set. One is for inside the car, to provide a visual reminder that you are holding yourself accountable for attentive driving. One is for your bumper or rear window, to announce your accountability pledge to attentive driving to the world. The stickers make great gifts for your loved ones, to remind them of the importance their own actions play in their safety and the safety of others. If you wish to buy in bulk, email us at [email protected] so we can make special arrangements. 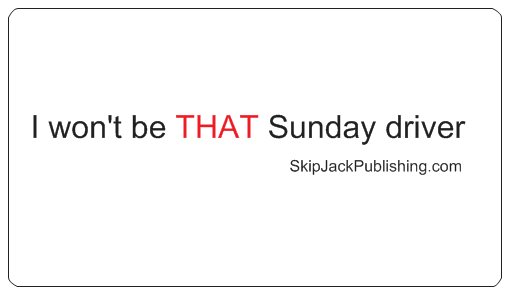 Inside sticker. Bumper Sticker shown at bottom of page.

I won’t be THAT Sunday driver.

Originally published at http://pamelahutchins.com/2012/06/11/i-wont-be-that-sunday-driver/ (and you should read it there, too — the comments are powerful): 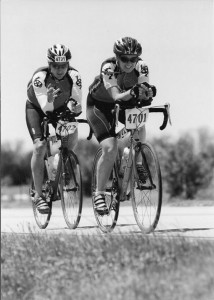 One Sunday, a wife lost her husband and two kids lost their father. My brother lost a friend, and his father-in-law lost his attorney.

On this Sunday, a young person drove a car down the wrong side of the road, the car veering to hit a bicyclist head on. The bicyclist flew through the air, landed in a ditch, and died before help arrived, his friend and co-worker powerless to do anything for him.

That Sunday, one person drove unsafely and another didn’t. One person walked away uninjured, another lost his life.

No matter what our excuse, when we operate a machine that can cause the death of others, we bear responsibility for its safe operation. That sends absolute shivers through me. You guys, I am a bicyclist and I am a driver. As a driver, I know I don’t always pay perfect attention. I know I have lost focus, veered, over-corrected at the last second, and strayed off path. I haven’t killed anyone, but I could have. And I’m a bicyclist, a person who worries about these things, who pictures metal slamming into flesh and pavement ripping into bone.

Seven years ago almost to the day, the exact same thing that happened on Sunday, happened to my husband Eric. Well, almost exactly the same thing. The only difference was that Eric didn’t die. He nearly did, and he endures pain every day and will the rest of his life, but he carries on almost normally. He lived. I still have him to hold.

I am angry at the woman who drove her car head-on into my husband. I really, really hate her for not paying attention, for not watching the road in front of her, for being on the wrong side of the road, for slamming her big, heavy, cold, hard steel car into my husband’s body.

I am sure that the family of this wonderful man who died on Sunday feels the same way toward his killer. And yet, but for the grace of God, there go I. Not often, not recklessly, but, sometimes, I lose my concentration for just long enough. I’m a Sunday driver, lacksadaisacal, forgetting the risks, normalizing the risks of this everyday activity.

I have to do better. I have to. Starting this Sunday when our friend died, my cell phone is going in my closed console every time I get in the car. The bag of food from the drive-through place can wait until I stop. The makeup? I’m perfect enough just as I am. I can yell at the kids later. Or pull over. No more digging for change. Diving for dropped sunglasses. Scrolling through playlists.

I can’t be that person.

I can’t let myself be that person. I have to help my children not be that person, the killer. Someone that kills another human being, by accident, but through their own fault or failure to prevent, which, in the end, is the same difference. One may hurt the killer’s soul more than the other, though, in the years of bitter regret that follow.

No more. I won’t be that Sunday driver.

As a bicyclist, I am terrified. I know I can do everything right on my beloved pink Trek Pilot WSD and still die. As the wife of an avid bicyclist, I am freakin’ scared out of my mind. I can’t keep him from riding. It’s his favorite thing in the world besides the offspring and me. He’s actually been hit by not one but two cars and also a horse (which isn’t as funny as it sounds), and he still thinks the risk is worth it. The lure of the wind in your face, the countryside flashing by, the exertion, the camaraderie: it’s all pretty intoxicating, I’ll admit. We strategize on how to ride safely, but, in the end, if a car veers straight at one of us, there is not much we can do.

If an angry trucker comes too close to see if he can make the cyclist fall, because the stupid bicyclist had the audacity to use his road, if the driver is honking his horn at the last second to increase the “surprise,” and we swerve under his wheels, there is nothing we can do. The first part has happened to us, but not the last. And more than once. And you know what’s odd? We are single file, on the shoulder riders, with every right to share the road, riding at optimal times so that we won’t disrupt traffic or inconvenience drivers. You would be too if you’d bounced off as many bad drivers as Eric has.

I’ll never be that person either. The angry driver who thinks it is funny to scare others “to death.”

There’s something else I won’t be: the bicyclist that runs stop signs or cuts in front of cars or weaves in and out of traffic. Or rides in high traffic areas, during busy times of the day. I won’t ride unsafely and make myself the haunting memory that never leaves a driver’s mind. I won’t be that Sunday driver, either, that Sunday bicyclist. Just like Eric wasn’t, when he was hit by a rusted brown Impala on a lonely St. Croix road, seven years ago.

Just like our friend wasn’t, on the Sunday he died.

My sadness for his wife and kids is tinged with a selfish fear of losing my own husband. My anger at the driver is laced with my anger at all the drivers who have endangered me or my loved ones. Yet my heart breaks pure and true for his survivors all the same. Their loss is great. Their pain unmeasurable.

May God ease their suffering. May we all learn and become better sharers of our planet in some small way as a result of this tragedy. May we love each other with a gentle grace that demands our full care and driving attention.

Pamela Fagan Hutchins is a driver, a mother, a wife, a bicyclist, and the author of Hot Flashes And Half Ironmans, amongst many other books.

Won’t you join us in our vow to eliminate distractions and raise attentiveness in our driving, for everyone’s sake? You can do it by sharing this post, spreading the word, and exemplifying accountable attentive driving by the “I won’t be that Sunday driver” standard. Click Here to get your own sticker sets.

Bumper sticker. Inside sticker shown, above.